In June 2018, EWG released the Bicycle Planning Guide. The guide was developed to assist Local Public Agencies as they develop projects for Transportation Improvement Program (TIP) funding consideration. It provides an overview of planning for bicycle facilities, a compilation of current best practices, and additional resources for design and implementation.

In July of 2018, EWG released two documents titled 2018 Bicycle Crash Analysis and 2018 Pedestrian Crash Analysis. The documents analyze all reported crashes in the EWG region that include a bicycle or a pedestrian. They include maps of the region, charts, graphs, strategies to prevent these crashes, possible funding sources and outside resources for Local Public Agencies.

The growing popularity of bicycling in the St. Louis region prompted EWG to update the Regional Bicycling and Walking Transportation Plan.  The Plan places emphasis on defining the nature of bicycling and walking environments and serves as a “how-to and when-to” resource document for communities developing facilities.  The final Plan was completed in July 2005 and adopted by the EWG Board of Directors.

EWG maintains an inventory of existing on-street and off-street bicycle facilities in the St. Louis region.  These bike facilities are depicted on the Bike Facilities Map. 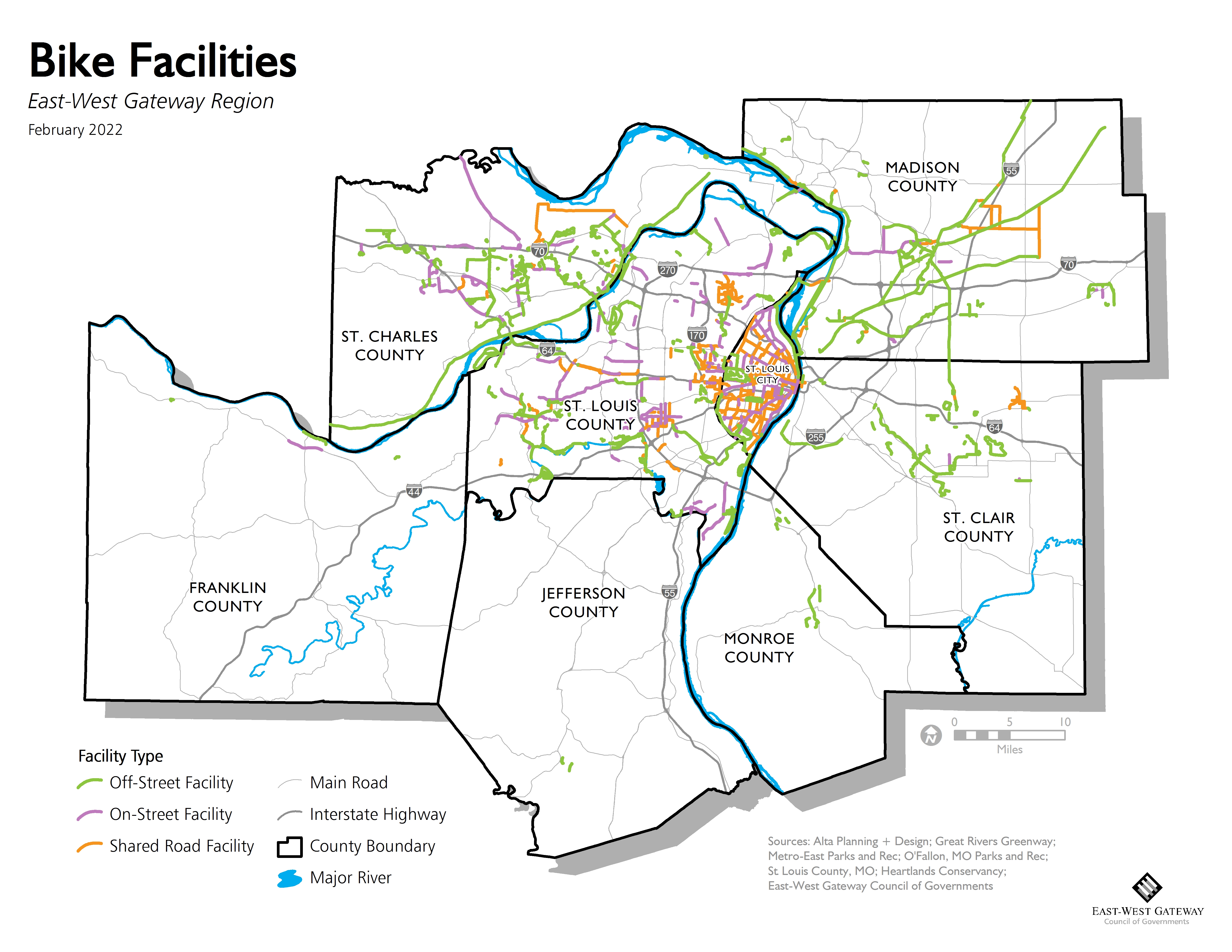 In addition to identifying the regional system of on-road bikeways, the Gateway Bike Plan includes strategies for education, encouragement, and enforcement to make bicycling safe for residents of all ages and abilities.

East-West Gateway partnered with FHWA to host a half-day virtual workshop to help educate our local public agencies on the Bikeway Selection Guide that was released by FHWA in February 2019. Due to COVID-19, the workshop was held virtually, with opportunities for interactive discussion and online quizzes and polling. Consultants walked participants through a series of steps to develop or improve plans for bikeways, considering context and important trade-offs, and demonstrated how to apply the guide to everyday projects and plans.

East-West Gateway partnered with the National Association of City Transportation Officials (NACTO) to host a one-day Bicycle Planning Workshop on May 15, 2019. Planners, engineers, and local public agencies from across the region attended and learned the latest bikeway design best practices, including strategies for selecting and implementing low-stress bicycle facilities. An interactive group exercise allowed attendees to apply the concepts learned in a hands-on approach. Nationally, pedestrians account for over 17.5 percent of all fatalities in motor vehicle traffic crashes, and the majority of these deaths occur at uncontrolled crossing locations such as mid-block or un-signalized intersections. These are among the most common locations for pedestrian fatalities generally because of inadequate pedestrian crossing facilities and insufficient or inconvenient crossing opportunities, all of which create barriers to safe, complete pedestrian networks.

East-West Gateway partnered with FHWA and the City of Woodson Terrace to provide a one-day training opportunity on March 22, 2019 for local agencies to address the pedestrian safety crossing problem and learn about safety improvements and innovative crossing treatments. Attendees also participated in a group field visit exercise to evaluate the nearby Woodson Road corridor for pedestrian safety and make recommendations for improvement.

Bikeable & Walkable Communities Workshop on June 5, 2018. The workshop was intended to help educate our local public agencies on the importance of planning for bikeable and walkable communities, and to provide ideas and strategies for implementation. Consultants from Sam Schwartz presented on a variety of topics, including design best practices, low-stress facilities, walkability analysis, and case studies. Representatives from local governments and agencies across the region attended the workshop and participated in small group activities to explore possible solutions to real transportation issues in the St. Louis area.

EWG established the St. Louis Regional Bicycle and Pedestrian Advisory Committee (BPAC) in April of 1995 and is comprised of public, private and non-profit representatives from the St. Louis region.  Its principal purpose is to enhance access and mobility throughout the St. Louis region by encouraging the coordinated development of bicycle and pedestrian facilities.
The BPAC meets quarterly on the second Wednesday of the month from 2:00 to 3:30 p.m.

Other Regional Bicycle and Pedestrian Planning

Great Rivers Greenway (GRG) is a public agency making the St. Louis region a more vibrant place to live, work and play by developing a regional network of greenways. The organization was created in 2000 by a vote of the people in St. Louis City, St. Louis County and St. Charles County to create a sales tax dedicated to parks and greenways. Those funds allow GRG to collaborate with partners and communities to build, care for, and bring to life a network of greenways, creating healthy habitats and watersheds along the way.

The Metro-East Park and Recreation District (MEPRD) was formed by voters in November 2000 and is responsible for the development of parks, trails, and greenways within the boundaries of Madison and St. Clair counties in Illinois.

Ride Illinois is a statewide advocate for all Illinois bicyclists, promoting bicycle access, education, and safety.

Trailnet is a St. Louis based non-profit organization with a 25-year history of promoting active living –a way of life that encourages people to integrate physical activity into their daily routines. Trailnet has also developed Bikeable-Walkable community plans for several municipalities in the St. Louis region.

Webinars and online engagement options for bicycle and pedestrian  planning