The standards must protect sensitive populations including children, elderly, and people with existing heart and lung disease. Over time, the EPA has revised and strengthened NAAQS to better protect public welfare from known or anticipated adverse effects.  Transportation-related pollutants of concern are ozone and fine particulate matter (PM2.5).

Currently, seven counties and one township in the St. Louis region have been designated by the EPA as not attaining the 2015 eight-hour ozone standard of 70 parts per billion (ppb).

Click on the map below to enlarge the image 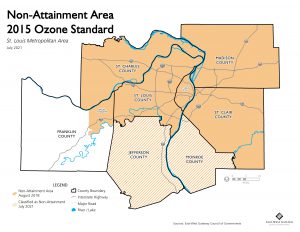